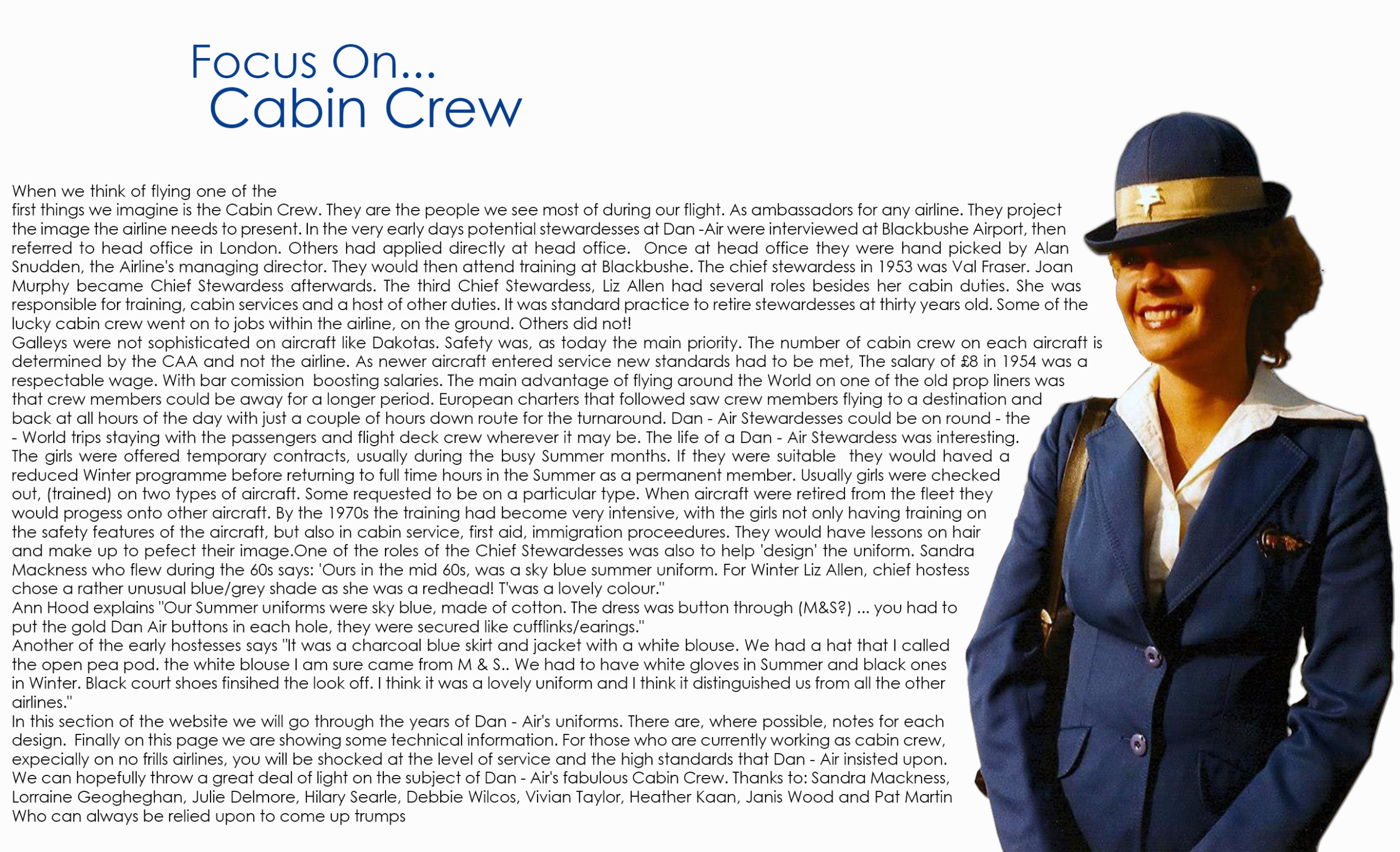 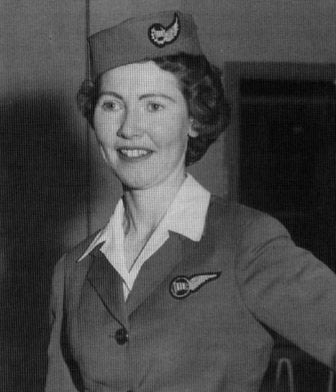 Joan Murphy was one of  the airline's first Chief Stewardesses. There are no colour photographs  of any of the uniforms for quite some time in our time line. It seems  that this uniform was worn by all stewardesses (Dan Air did not employ  male stewards until the 1980s) The colour we are told was Navy Blue. The  shirt was white cotton and the look was complemented by white gloves  and black shoes.
The  Dan Air magazine from 1983 celebrating thirty years of flying had a  montage sketch of Dan Air aircraft and staff. The picture shows  stewardesses in the pale blue summer dresses with slightly darker hats. If this  is true, this outfit lasted well into the 1960s. 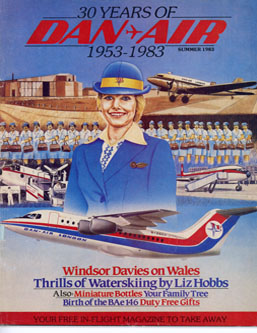 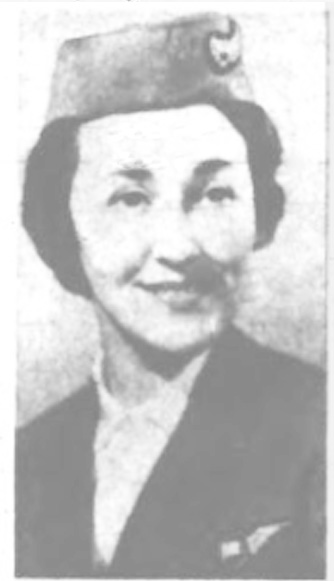 Above is a picture of Miss. Elizabeth Allen who was with Dan-Air  from 1958. She was maade chief stewardess in 1962 aged 26. She had studied at Jarrow Grammar School before attending finishing school at the Alliance Francais and the Sorbonne. When she took on the job she had 3,000 flying hours to her credit. She lived in Kensington.
1965

The 1967/68 uniform was still in charcoal blue. The only feature that had been changed it. seems was the hat. 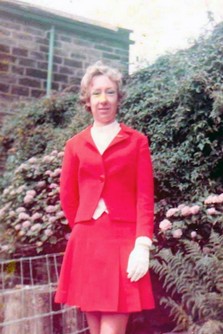 1970 saw the intorduction of a brand new uniform. The airline had decided to have a look unique to it's girls. We are not sure of the designer, but names put forward have been Mary Quant and Mansfield. This uniform was popular as it was very fashionable. Perhaps it was too fashionable as by the time it was replaced just three years later it had become out of style. The hat may appear to look black, but was in fact a dark blue. 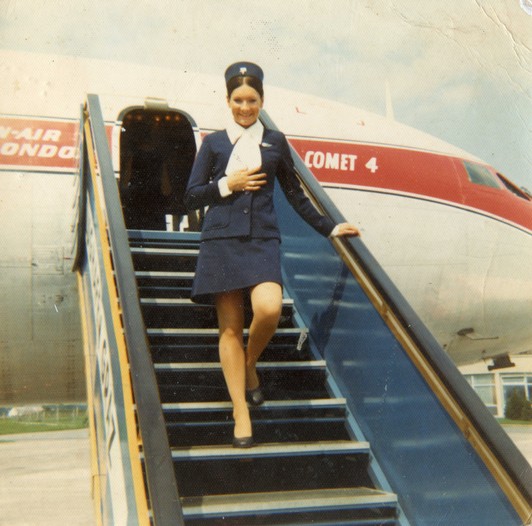 When the 1974 uniform was presented, it was saw the company revert to blue as the main colour. This time it was described as "French Blue" It can be seen above, worn by Airleen Levis. On first appraisal it could be seen as a classic design. However, of all the comments we have had - this uniform is the one that is constantly derided. Chceck out these comments!
1974-76 Gallery
1976 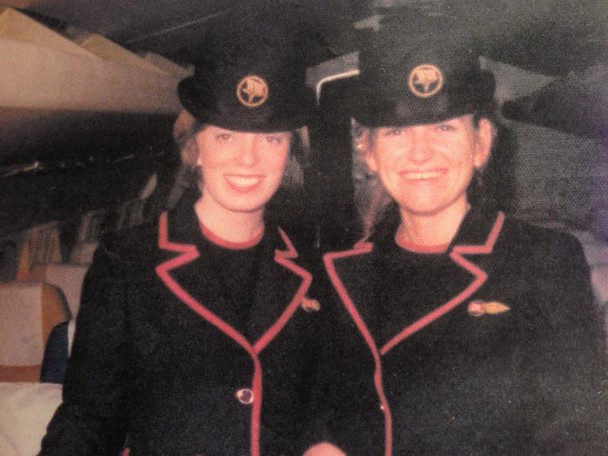 As much as the  74-76 uniform was critisized. The 1976 replacement was complimented.  The staff had a choice of two colours with the blouse, red or blue.  There was a short sleeved option for summer as well. The house of  Mansfield came up with the design. Although the uniform looks black on  most pictures, it was, in fact the darkest blue. By having such a dark  blue the uniform matched the aircraft. One critisism came from one  stewardess who said "I always thought the hat was a bit on the high side!  I prefered the blue one that came after it. now THAT was a uniform."  Other comments included
1976-78 Gallery
1978-1986 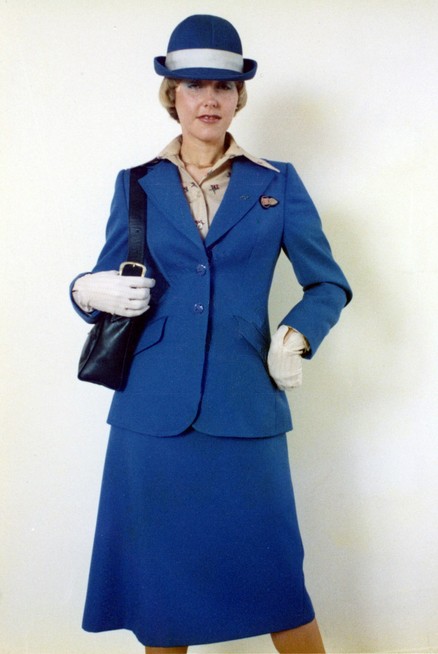 In some respects it's slightly misleading to say that this uniform lasted 12 years. But in many ways it did. There were slight changes to it, but the jacket, hat, skirt and hat stayed unchanged. Some of the girls preferred trousers, but they stopped being a part of the uniform in the late eightes. There were some changes too in the overcoat. The cream option was dropped in favour of the cornflower blue one that had always been one of the options. This uniform was called "Mix and match" at the time of its conception. The designers, the house of Mansfield had initially chosen a brown uniform. This was quickly shelved. Tank tops or jumpers were an option too. In 1978 the uniform was launched. The blouse and dress in lemon had the company's compass and flag logo as a pattern. Shortly after the girls began wearing it they realised that at normal washing temperature, the whole design 'ran' this in turn made the lemon background a rather dull colour. It was changed in 1979 to a pale lemon, available in a blouse or dress. The outsize collars on this lasted until 1983 when a new look was debuted. The 1985 more changes had been introduced. This time, a white short or long sleeved blouse complemented the look. Comments included.
1978-86 Gallery
1986-1989 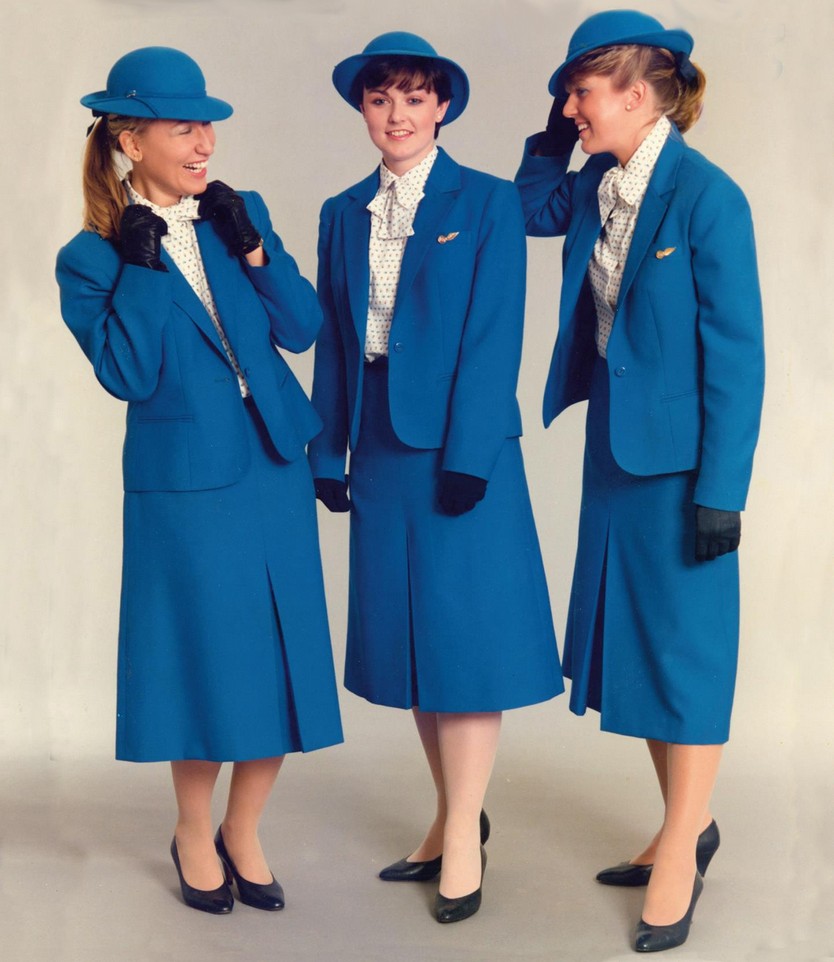 Once again the House Of Mansfield was called in to work on the design for a new look. The bowler style hat was dropped in fabour of a felt hat. Cornflower blue remained the colour. The uniform was more tailored. The skirt length had increased. the kick pleat at the front was also to stay. A new, dotted pattern appeared on long and short sleeved blouses.This was available as a Summer dress too. The tank top was changed to match the blue of skirts and jackets. A much neater bow was introduced which was allowed to be worn in four styles. Comments included.
1986-89 Gallery
1989-1991 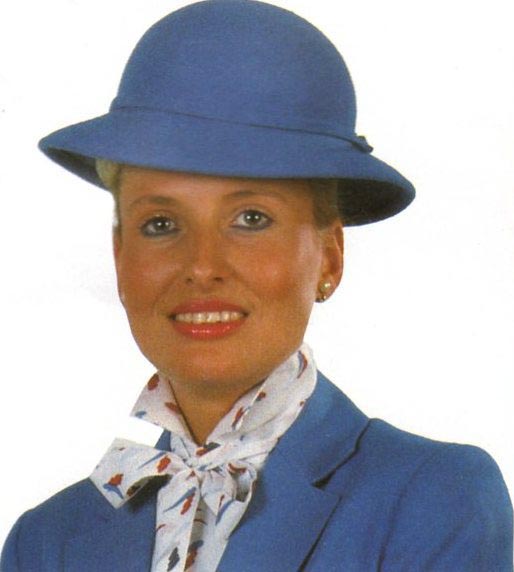 Very little  changed in the 1989 uniform apart from a slightly lighter blue on the  fabric. The main change was the introduction of a bright, bold print on  the white blouse and Summer dress. Seen up close it can be seen to bear  some resemblence to a bird in flight. The prnt featured the red and blue  that adorned the aircraft in the fleet. Now the airline wanted to  present itself as a smart scheduled airline targeting business  travellers. The cut of the jacket left the 1980s giant shoulder pads out  too. A significant streamlining in style had been achieved. By now men  were working as cabin crew and a simple grey trouser with black blazer  uniform was designed. This saw a white shirt with company tie and pin as  accessories.
Comments included.
1991 Gallery
1992 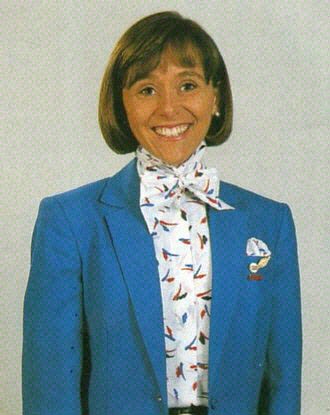 The uniform  that came on stream in 1991 was hardly a change at all. The hat had been  dropped, causing relief to some, but consternation to others. It is  worth noting that ground grew who worked with Class Elite passengers  wore a black uniform. All other ground crew had worn the same uniform as  cabin crew. Except at Gatwick where the familiar brown Gatwick Handling uniform was  worn.
Comments included.
1992 Gallery
Whilst we were looking at the pictures of the cabin crew and what they wore - it is worth also mentioning the hard work that they had to do with the airline. In a lot of cases those early flights were at very unsociable hours. To do the job when you did not live near an airport could mean reloacting to a place where one did not know any other people. Many did just that. The crew had to work long hours under a great deal of pressure. They were very well trained, not least in safety proceedures. They had to engage in training in water as well as in mock ups of aircraft cabins. Far from being just a waitress in the sky the crew would have to deal with cash and stock and to satisfy customs requirements. This would mean ensuring that bonded stores had to be sealed in readiness at the UK. On flights that were very short the airlines would add extra touches to lure customers. A full cooked breakfast on a flight of less than an hour from London to Glasgow was not an easy task for more than a hundred passengers. Add in a complimentary drinks service and a hot drinks service and you eally had to work fast. Some of the crew who worked in the 1960s often had to work several sectors in one day. A shift pattern that saw Gatwick - Jersey - Gatwick - Guernsey - Gatwick - Ostend - Gatwick was not uncommon. Dan - Air did commence long haul flights in the early 1970s. This would mean that crews would disembark at the US end and wait a few days for the next incoming flight to work their way home. Later on the company concentrated on European charters and schedules. On occasion this would mean a 5.5 hour trip to Eilat or Luxor with a turn around and working flight home. When one considers that crew had been at the airport for briefing perhaps two hours before a flight and after it returned for debriefing and cashing up, once can see that it was a gruelling life. That said, the crew were renowned for their spirit and their sense of fun. All the stories I have heard lament the passing of the airline and most pepple tell me that their days at "Dans" were the best of their life.
Let's have a look at some company documents to demonstrate just what they had to undertake on each flight. Viewing the documents will give the reader an insight into how much more cabin crew were expected to do than today. The standards were exceptionally high. Today it is not unusual to be handed a drink with the bottle inside the glass. Cans handed to passengers is normal on airlines like Easy Jet - this would never happen with Dan - Air - have a look at these and next time you fly - observe and you will see why, the secret WAS service.
CABIN SERVICE MANUAL
DISCUSS THIS SUBJECT
1 comment
Leonard Baddely
The photo of a stewardess on a Comet unidentified 1972/73 in a red uniform, is my wife Carolyn Hales, Yes Carolyn kept her name married, she used to go to the reunions with her very close friend Margaret. I would love to have a copy of this photo. We live in Cornwall where Carolyn was born. Our address is.... 4Trefloyd Close Kelly Bray Callington Cornwall PL17 8DP. It would be wonderful for us to have a copy of the photo.
Thanks Leonard.
Mark as abuse