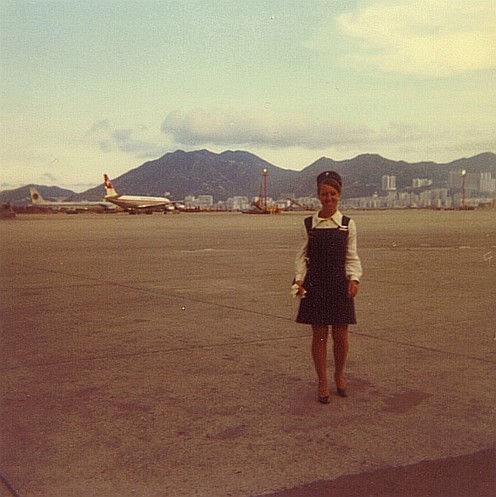 My name was Pamela New (now Fleet) and I worked for Dan Air for 3 years from early 1972 to 1975.  I flew the Comets, 1-11's, 727's and 707's.  I remember my time with Dan Air with a lot of affection.  We worked hard but had lots of fun and it was a great way to see the world.  I remember the camaraderie - we all seemed to live in shared houses around the Crawley area and there were always parties to go to when we weren't flying.  I am still in touch with Joy Branscombe (now Nicel) with whom I shared a house and who now lives in Brentwood, and Angela Raby (now Galloway) who lives in Maidstone.  We meet up about once a year.
I left Dan Air a few months after I married David, an accountant,  and moved to Brighton.  We have two sons, one who lives in Melbourne Australia with his Australian partner, and the other who has only just moved out of home this past year!  David and I retired together 6 years ago (I was working in a bank) and have spent the time since doing as much travelling as we can afford.  I have still not got the travelling bug out of my system!  When we first retired we spent 3 months backpacking around Australia and New Zealand, using the Magic Bus and Greyhounds, staying in hostels and kidding ourselves we were still young.  We even tried Glastonbury before we went (and yes it was one of their muddier years!).  We have now decided to act our age and travel more conservatively.
GALLERY
Back to content