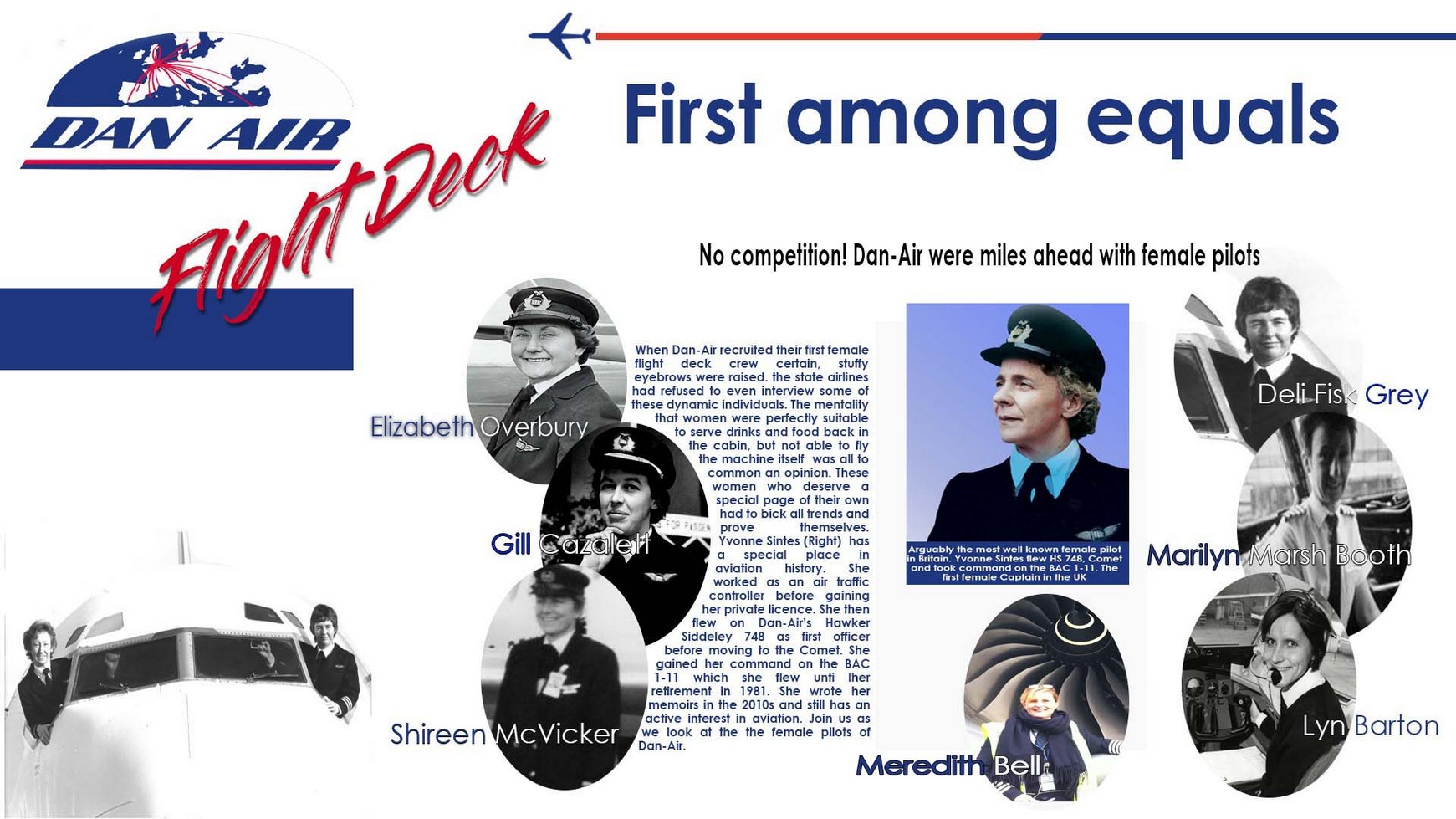 Yvonne Pope:
Originally working as cabin crew for BOAC in the 1950s, she started flying through membership of the Airways Flying Club and also joined the RAF Volunteer Reserve. She became a full-time flying instructor after her first husband died, leaving her with two young boys to bring up. A spell as an Air Traffic Controller at LGW followed, and Yvonne eventually joined Morton Air Services (then a BUA subsidiary) as a pilot on DC-3s. This eventually led to Captaincy, then Yvonne left Mortons shortly before they were fully absorbed by British United, to join Dan-Air. Initially flying in DC-3s and Ambassadors, she moved to jets on the Comets and gained her Command on 748's in 1970. Marilyn Booth was often her First Officer on the 748s, so all-female crews were common even back then. Yvonne became the UK's first female jet airliner Captain on 16th June 1975, when she took command of  a Dan-Air BAC 1-11 from Gatwick to Heraklion. Followed by the DH Comet, her favourite aircraft.
Deli Gray Fisk:
Fascinating stuff!  Malcolm Brownlie sent me a link to the website.
PPL aged 18, CPL aged 19 and ALTP at 21
1968 Deputy CFI at Thurston Aviation
Joined Skyways in 1970 on the HS 748
1972 Dan-Air took over Skyways and joined Comet fleet
Converted to B727 in 1974.
Following the demise of Dan-Air, and the ensuing legal battle, became founding director of start-up airline, Europe Elite in 1995, flying B757s to Kazakstan & Uzbekistan from Heathrow. Several ex Dan-Air staff were involved but, sadly, the full funding never materialised.
in 1997 Deli became involved in politics.  She stood in 2001, 2005 & 2010 as a candidate for UKIP
Hope this helps,
Delphine (Deli) Gray Fisk
I have just discovered with delight your website. I'm delighted to see a photograph of Elizabeth Overbury, who taught me to fly at Luton flying club, where I gained my PPL in 1963. After 7 hours instruction, she got out of the Auster J1N  at the end of the grass runway and calmly said,”I'm getting out here to have a smoke. Take the plane up, and I'll be waiting here for you to come and pick me up.” Luckily, everything went without mishap.
I was also pleased to meet Clare Roberts at Luton airport, about whom you ask for more information. She and her husband kept the Chris Air De Havilland Dragon there for a while. I think there was some reason why Chris couldn't fly the plane, so it was Clare who flew it. Again, in 1963, she flew me and Chris as sole passengers from Luton to the Rochester airshow, and back again at the end of the day. All this is recorded in my flying logbook, and I also have a colour photograph of us together in front of G-ADDI. A photograph the aircraft  also appeared in The Times newspaper, when a light aircraft crashed at Rochester behind it.
I hope this may be of some interest to you. Kind regards, Robin Apthorpe
Dan-Air was a pioneer in employing female pilots for their airliners fleets (although there was no actual official policy - they just employed qualified pilots, regardless of gender). Yvonne was soon followed by the aforementioned Marilyn Booth, Elizabeth Overbury, Deli Gray Fisk and many many others.
YVONNE POPE (SINTES) 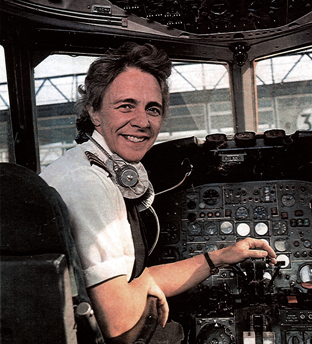 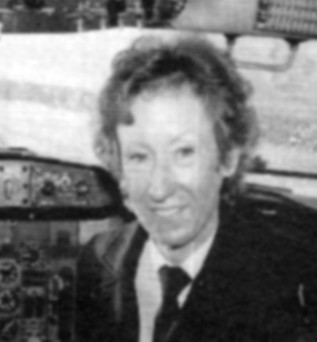 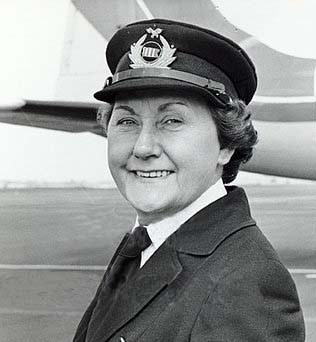 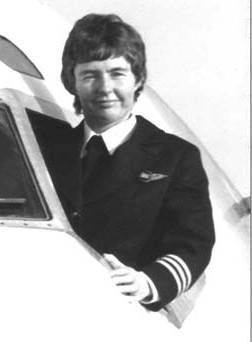 BIOGRAPHY
Yvonne Pope (Sintes)
Yvonne Originally worked as cabin crew for BOAC in the 1950's, she started flying through membership of the Airways Flying Club and also joined the RAF Volunteer Reserve. She became a full-time flying instructor after her first husband died, leaving her with two young boys to bring up. A spell as an Air Traffic Controller at London Gatwick followed. Yvonne eventually joined Morton Air Services (then a BUA subsidiary) as a pilot on DC-3s. This eventually led to captaincy. Yvonne left Mortons shortly before they were fully absorbed by British United, to join Dan-Air. Initially flying in DC-3s and Ambassadors. She moved to jets when she trained on the Comet fleet. Yvonne gained her captaincy on 748's in 1970. Eventually Yvonne gained command on the Comet. She became the first woman in Europe to fly as a Captain on a Jet Aircraft. She also gained command on the BAC 1-11.
BIOGRAPHY
Marilyn Marsh - Booth
Marilyn began her career as an Air Stewardess on Britannia airways. She trained as a pilot at the Oxford Aviatioon Academy and joined Dan Air as a First Officer on the 748s. She often worked with Yvonne Pope so, All-female crews were common place with Dan - Air even back then. Marilyn went on to fly the Comet. After Dan - Air Marilyn emigrated to Australia where she worked with Sunbird Airways and Ansett Australian airlines. She is now retired.
BIOGRAPHY
Elizabeth Overbury
Elizabeth Gained command on the HS 748. She began her career working for Autair on their fleet of the same type. To gain her pilots licence she worked three jobs. Autair later became Court Liine where Elizabeth stayed until the company collapsed in 1974. She then joined Dan - Air flying the HS 748
BIOGRAPHY
Delphine (Deli) Gray Fisk
Delphine began flying as a child. Initially as a glider pilot where she broke records by flying solo and obtaining her PPLat 18 years old. Her Commercial Pilot's Licence was obtained at just 19 years old and her ALTP at 22 years old. Having paid for her training Deli was the deputy CFI at Thurston Aviation. She then joined Skyways, on the HS 748 in 1970 Where she gained command of the type. Two years later Dan - Air took over Skyways and Deli was promoted to the Comet fleet, and in 1974, the Boeing 727 gaining Captaincy on both types. She stayed with Dan - Air until the BA takeover. Deli was one of the main campaigners inthe legal battle for  compensation for the unfair treatment of Dan - Air flight Deck crew when they made redundant with unfavourable terms.
Deli was appointed managing Director of a short lived Airline Elite Europe. She flew Boeing 757s to Kazakstan and Uzbekistan from Heathrow
In 1997 she became involved in politics. Initially as a Conservative Party member she stood in the '01, '05 and 2010 General Elections as a candidate for UKIP.
SHIREEN McVICKER 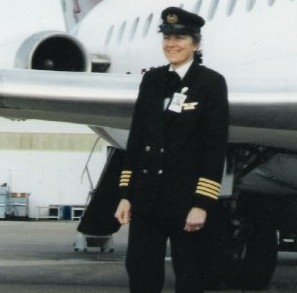 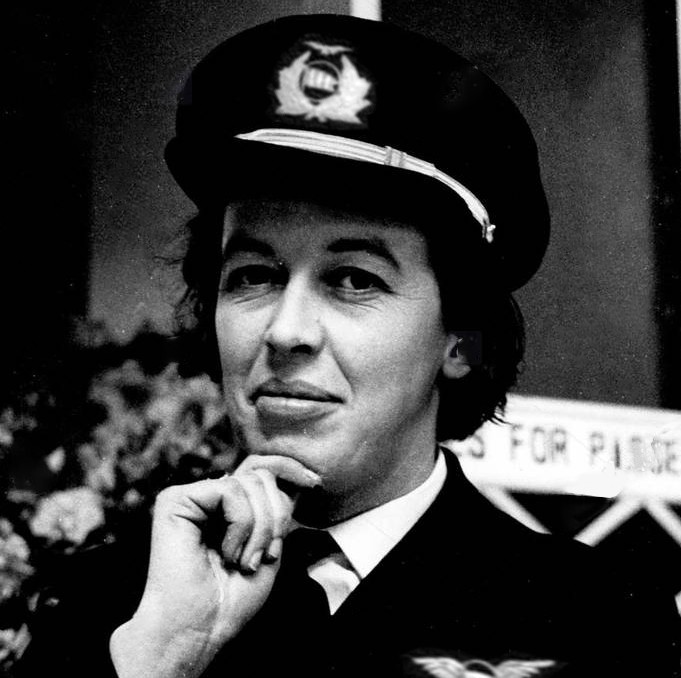 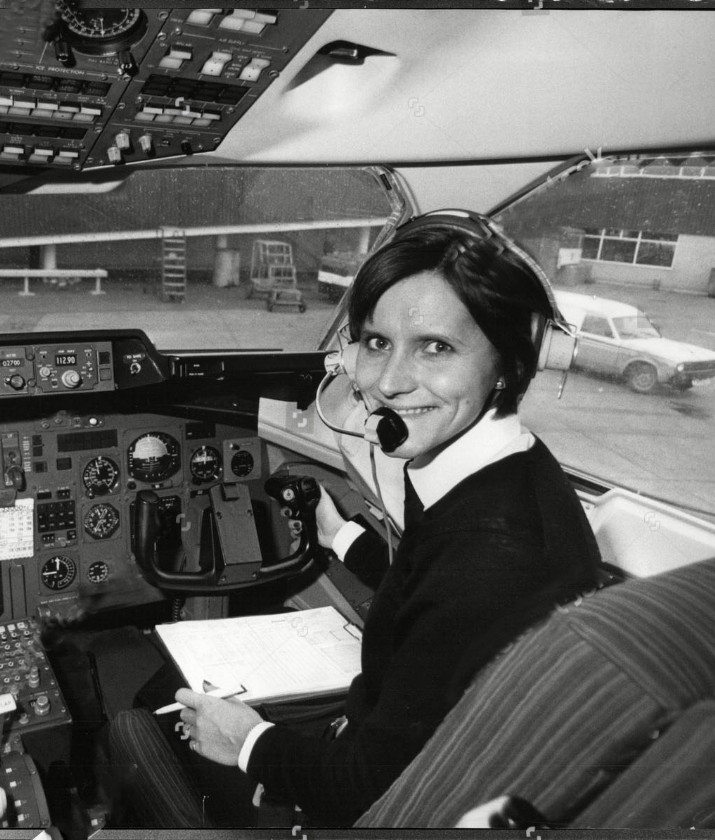 BIOGRAPHY
Shireen McVicker
A brief look at Shireen's biography will tell you that she has had an incredible life. After joining Dan - Air as a First Officer she went on to command the BAC 1-11 and Boeing 737. After the demise of the airline she went on to British World Airways where she worked as the Flight Safety Officer on the BAC 1-11 from 1993 to 2004. After that she went to Jet2 where she flew the Boeing 737 for a further two years. Shireen had a complete change of career in 2006 when she decided to train to become a Doctor of medicine. She trained for this at St. George's Univercity in in America. She now workes for the NHS in the UK
BIOGRAPHY
Gill Cazelett
Gill hails from Irelandand began flying as a young woman aged 20 . Initially her flying was on the Tiger Moth! After gaining her Private Pilots Licence 1957. She flew tourists around Bournemouth on pleasure flights for her first job flying. It was in 1957 that she entered the Christchurch Aero Club National Air Race. She was beaten at the last mile by another female pilot Sheila Scott. He next job was with Tyne Tees Air Charters flying Rapides and Austers. A car accident meant Gill was unable to fly. So she used her time to working as a petrol pump attendant to pay for further training. She then joined Hunting Clan on the DC 3. She flew with Gregorys before joing Skyways on the HS 748. Dan - Air's subsequent take over of Skyways saw her work with Dan Air until her retirement.
BIOGRAPHY
Clare Roberts
We are looking to find more about Clare. In 1966 she was flying cattle for Dan - Air on a part time basis. She was a first officer with the Dakota at the time. We have discovered that she also had the distinction of flying minature horses from Sardinia. As a free lance pilot she worked on the De Havilland Dragon. Her work involved arial photographic work. If you have any more details please contact us
BIOGRAPHY
Lyn Barton
Captain Owen Smith writes:
'I remember her name but never flew with her as I believed she left before I joined Dan-Air and I started on the BAe HS 748 Night Mail flights as a Flight Loadmaster in 1989.  Lyn Barton moved over to British Airways before I joined Dan Air in 1989. She was flying a leg as the relief F/O on the B747 fleet.' 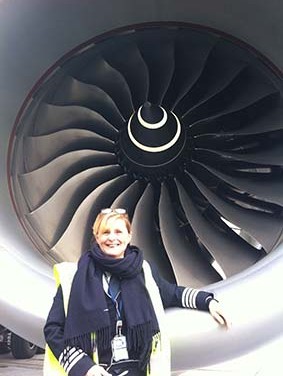 BIOGRAPHY
Beryl Sanders,
We have been unable to find any details of Beryl's career with Dan - Air or any other airlines. If you have any details we weould really like to hear from you.
contact us
BIOGRAPHY
Meredith Hill / Forman
Flew the BAe HS 748 fleet when she was a young F/O. She is married now and is now known as Meredith Forman. She went on to became a training Captain with British Airways She left the 748 fleet and went on to fly the B737-400s.
THE MARILYN MARSH BOOTH GALLERY
THE YVONNE POPE SINTES GALLERY
ORDER THE YVONNE POPE SINTES BOOK
Yvonne Pope Sintes has written her autobiography. It was published in 2015 and is available from Amazon click here to purchase (Site opens in a new window) 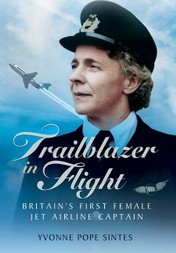