Wiith forty nine aircraft Dan-Air had the largest fleet to date. In total more than 2.5 million passengers were carried. Dan-Air was the second largest carrier in the UK in terms of fleet size and passengers carried. Dan-Air also carried more charter passengers than any of their rivals.
Dan-Air started 1975 with an application to expand the Newcastle - Kritiansand service.  Further applications were made to serve Gatwick - Leeds/Bradford - Tees Side - Newcastle to Stavanger, Kristiansand and Oslo. In January the airline announced it was to take delivery of four BAC 1-11 500 series aircraft on a long lease. The 1-11s would be used for the busy summer season. The 500 series aircraft would be configured to carry 119 passengers. In some cases they would fly to the Canary Islands with a refuelling stop. The Boeing 727 could fly none stop, as could the Comet and 707.
The success of the oil related charters meant more aircraft needed to be based in Aberdeen. This led to a shortage of HS748 aircraft. This was the given reason for Dan-Air's decision to prune its daily Newcastle-Manchester service to a Tuesdays and Thursdays product. John Clementson, Dan-Air's station manager at Newcastle said that it was also part of a rationalisation programme. It was, he said, a reflection of the difficult time the aviation world was having, particularly on domestic services. British Airways announced that they were axing 1,800 jobs many of them pilots. Dan-Air were able to grow as a company despite the bleak economic picture. The Civil Aviation Authority (CAA) granted Dan-Air the right to fly to Norway no more than 14 times a week in both directions. The flights would orginate from London Gatwick and/or Newcastle  and/or Tees Side and/or Leeds/Bradford to Kristiansand and/or Stavanger, the licence was for a ten year period. The BAC 1-11 would serve the routes and promised to be cheaper than a boat crossing. The flights would be carried out by BAC 1-11 200 series aircraft, two of which, were purchased from Zambia Airways.  During the ecconomic crisis of the previous year several Dan-Air Comets had been stored at Lasham. The advantage of the Lasham facility cannot be underestimated.  Aircraft could be stored there free of charge. Other airlines with no such facilities were facing heavy airport parking fees. This led to airlines going out of business or selling aircraft.
Although much charter work had been lost by the Clarkson's failure. Lunn Poly had siezed the avaialble trade and chartered more Dan-Air Aircraft, as did Cooks, Cosmos, Blue Sky, Airtours and Arrowsmith. Blue Sky opted for Dan-Air on its new charters from Aberdeen to Majorca. It was the first time that Aberdeen had been featured in their holiday programme. The Clarksons collapse was followed by the introduction of  the voluntary ATOL scheme. Tour operators would pay into the scheme, the funds would then be available if any airline or Tour Operator collapsed. Initially it was suggested all companies pay the same. But in a later agreement smaller Tour Operators were enabled to pay less. It would also mean that Tour Operators would have to give the CAA access to their accounts. If a company did not have a sufficiently good set of trading figures, licences would not be given until the company had an injection of funds. That system is still in place today. The government also set up the Air Travel reserve fund. That fund was to be repaid by Tour Operators with a 1% levy on all package holidays. The scheme was also extended to all ABTA travel agents.
Dan-Air were experts at purchasing second hand aircraft that were relatively young in age. They sourced them from airlines with excellent reputations. Pan Am for Boeing 707s and Japan Airlines for 727s being just two examples. The failure of Court Line saw several BAC 1-11 aircraft put up for sale. The aircraft were in good condition. Prices would be reasonable as the receiver needed to sell assets on. Dan-Air were quick to secure not only the aircraft, but thousands of seat covers! Court Line had painted their own aircraft with vivid colours which reflected the 'feel good' nature of a holiday flight. The seat colvers had a print that featured all those bright colours. Dan-Air had enough of them to last until the end of the decade! 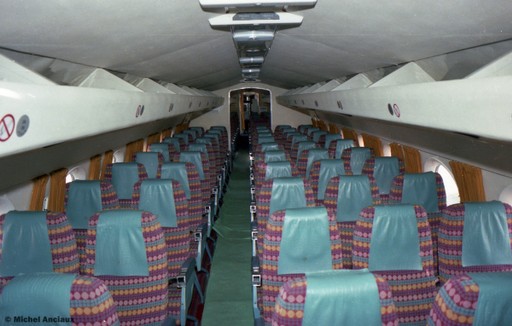 Page and Moy chartered Dan-Air Comet aircraft for a series of holiday flights to Austria for the Summer months of 1976. The upmarket brand was a feather in the airline's cap. Malta Villas Ltd would use Dan-Air Boeing 727 for the Manchester flights to Malta and Majorca. A total of 18 Comet would be flying in Dan Air colours for the 1976 season, they were complimented by 14 BAC 1-11, 6 Boeing 727 (up one) Ffur Boeing 707 and eleven HS 748. Together those aircraft carried a record 2,846,000 passengers. Early in January a second engineering base was opened at Manchester. It would service the company's HS 748s and BAC 1-11s.  British Airways which had been formed in 1973, following a merger with BOAC and BEA continued to protest at any new route applications the independents applied for. Dan-Air and the other independents fought for any of the available market share. Independents even objected to other independents increasing their network. When Dan-Air applied to serve Stavanger in Norway from Edinburgh Air Anglia formally objected. The new route from Aberdeen-Isle of Man was launched early this year.
Jetsave were delighted with the results of their 1975 offer of charter flights from Newcastle to the USA and Canada. In 1977 Jetsave wanted to repeat the successes. Six flights were planned for the season. The number was increased to ten within weeks, with many flight sold out entirely to Geordies. The ten flights would see five depart for New York and five to Ontario. There was even the promise that more would be added if demand warranted. Within a few days Jesave announced that there would be a further six flights to New York and six flights to Ontario from Birmingham. Bookings were said to be strong with fares ranging from £117-£147 reurn. 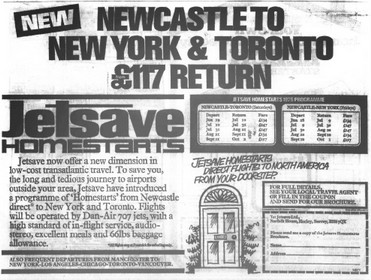 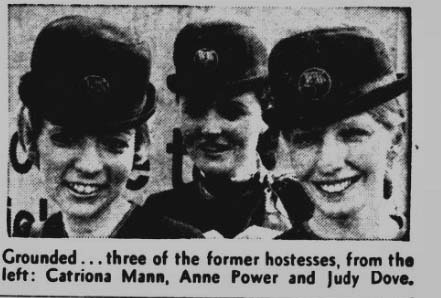 Pre tax profits for the first six months of trade showed that turnover was up from £19.4m to £30.3m an increase of 30%. Dan-Air made a pre tax loss of £1.4m against last years £763,000. The fleet had grown from 36 to 45 aircraft and leasing charges had cost £1.3m. As the six months trade only included one of the peak months (June) Dan-Air management were confident that the airline would return to profitability when the full year figure would be shown the following April. This was the usual routine with airlines and one explanation was that as the airline had grown so much over the last few years the figures would also be far greater. The extra aircraft would all be operated at their full utilisation.
Dan-Air Engineering (DAE) at Manchester would be responsible for the airline's (and other airlines) BAC 1-11 and HS 748 fleets. The rest of the fleet would continue to be maintained at Lasham. Newcastle aslo had extensive maintainance facilities for any technical issues that aircraft often had down route. DAE had built up a significant reputation and many other airlines used them to maintain their aircraft. Even the Royal Flight of foreign nations and private jet owners came to DAE. They were CAA approved and their American counterpart the FAA had also approved them.When the financial year closed in April the airline had made a pre tax profit of £1.35m up 20% on last year. the airline had a turnover of more than £52m. There was further good news when in April Dan-air was able to state that the enlarged charter fleet was fully booked for the whole Summer. During the last twelve months 2.5 million passengers had been carried. More than any other UK airline with the exception of the state owned monolith British Airways. As the year drew to a close the fleet had reached fifty aircraft, which was impressive by any standards. The airline could boast that they carried more passengers and had a larger fleet than several national airlines, Aer Lingus, TAP and Sabena included.
Above: The 'dumped' stewardesses.
New Routes 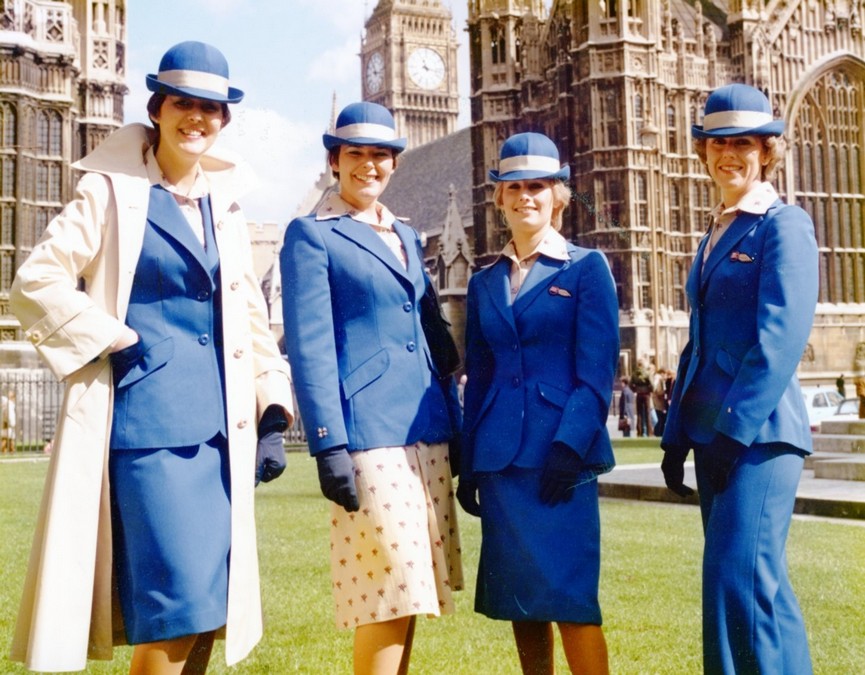