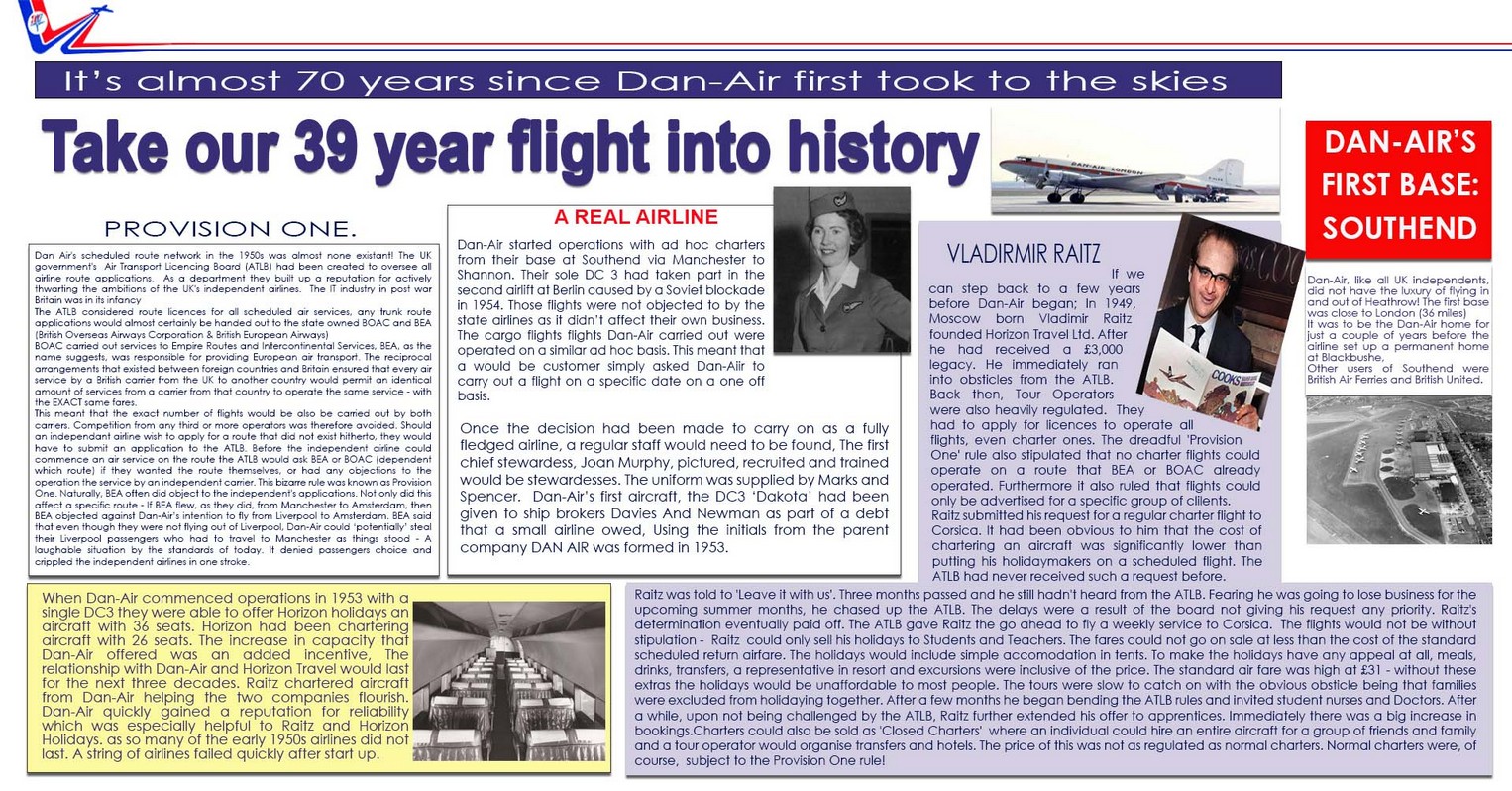 Three Avro Yorks were obtained and they were put to work on cargo charter flights. No licences were awarded to Dan-Air to carry out scheduled services. The UK's air licencing board - The ATLB stood by the 'Provision One' rule. As the company had, in a way, come about by accident, this year saw Davies and Newman decide to carry on with the airline. A new livery was designed and applied to all aircraft. The Ministry of Aviation  granted Dan-Air permission to operate a limited programme of a new type  of low-fare service that combined air travel and overseas holiday  accommodation at a cost substantially below the aggregate of each  individual component if purchased separately. Flights would be severly restricted and could not operate on routes where a schedued BEA or BOAC flight existed. British Eagle offered to be Thomas Cook's in house airline, an offer that was declined. New carriers in the UK foound themselves in all parts of the world carrying cargo on a charter basis. Passenger charters were still a long way from being established for average British citizens. Prices for scheduled flights were high and the desire to travel was low. For those adventurous enough, the Channel Islands were an obvious choice as was the Isle Of Man. The Dakota was ideal for short hops to such locations. Horizon Holidays chartered the Dakota for a series of flights to Sardinia. These holilday packages included accomodation in tents, all meals,drinks  and transfers to the hotel from the resort airport. The flying time was lengthy at more than  five hours. It could sometimes be a bumpy ride on some flights as the aircraft flew at relatively low altitude and were succeptable to any bad weather. The DC 3 was also unpressurised. This could result in 'ear popping' during take and landing. The aircraft were also prone to technical issues, leading to long delays.
1955

Dan-Air's exisiting base at Southend was relocated to Blackbushe. The fleet was reduced to just three models.  Dan-Air Engineering was established at Lasham, an ex RAF base with its own runway which had  recently been resurfaced by the Ministry Of Defence. The base had adequate hanger space to carry out maintenance on Dan-Air's soon to be expanding fleet. The Engineering division at Lasham were recruiting engineers for the DC3 and Avro York fleet with an hourly pay of 4 shillings and 4 1/2 pence per hour! A caravan site was available to successful applicants.
1956

Dan-Air's three Avro Yorks were joined with an extra model being obtained from the RAF. Now four of them would work on passenger charters and cargo flights. More than 350 Hungarian refugees were airlifted to safety in the UK by Dan-Air from Austria where they had fled the Communist regime. Dan-Air commenced its first scheduled service in May of this year, from Blackbushe to Jersey. A our line advertisement in the Daily Herald's classified section was all the airline did to promote the new service.
1957

Dan-Air's acquired three additional aircraft in 1957. This gave the airline greater flexibility. Dan-Air had plans to fly  domestic services from regional airports The Heron would be ideal for short, low densiity flights. It was suitable to land at runways that were not of the highest quality. The Bristol Freighter, as the name implies was an all cargo aircraft that Dan-Air made good use of. To help ensure the success of the Blackbushe-Jersey service Dan-Air continued to placen Newspaper Advertisements in the Daily Herald...

It is fair to say that the some of aircraft that carried passengers to new destinations were not without limitations. The Avro Yorks and DC 3s were all war time models refitted for passenger use. Independent airlines did not have the financial strength to purchase new aircraft.
One passenger who booked one of the Horizon charters from this period got in touch to say;
"We had booked to fly to Sardinia from Liverpool with, Starways. The airport was pretty basic, it only had a canteen type cafe. Our flight was due to leave about tea time and we were told to get ready to board it. We sat there for a couple of hours. We didn't know if that was normal or not, as first time flyers. So, eventually we get on this DC3 and it starts up. Then it stopped, my wife was not impressed - she suggested we get off and try and get our money back. Eventually we did get off.  Then repeated the whole thing. After about six hours in the terminal we were told to board a coach! So we crawl all the way to Blackbushe. We were ferried through customs and given a cup of tea with some toast. Then we were told that our aircraft was ready for boarding. As we walked toward it my wife was concerned that the new aircraft was from Denmark. As we got comfortable in our seats you can image our shock and horror when they said the aircraft had a technical issue! Luckily it only took about half an hour and we could stay on board. We arrived in Sardinia 27 hours later than scheduled."
1958

Dan-Air's fleet continued to grow. Charter flights were carried out worldwide. Sadly one of the company Avro York as lost in Malta after overshooting the runway.  Dan-Air's first reported SOS occured in 1958 when a DC carrying 33 passengers from Manchester and London to Ostend suffered an engine fire over the English Channel. Captain Paddy Meed noticed 'veins of black oil on the wing' he radioed a 'mayday' to Air Traffic Control who directed him to return to Manchester. The Stewardess, Betty Roberts, who had only joined Dan-Air three months prior managed to keep the passengers spirits up for the next sixty minutes. She joked about the weather in Manchester despite the aircraft filling up with mist and black smoke. Upon arrival at Manchester five fire engines were on hand to deal with the problem. Further drama followed when three elderly passengers fainted.
Dan-Air's scheduled network grew with an international destination added. The service would fly between Blackbushe and Basle. Regular charter flight licences were granted for Valencia,Beauvais and Pisa. Ad hoc charters were also carried out regularly. Italian hoteliers complained bitterly at the UK's ATLB for rejecting some of the charter flight licences applied for by UK airlines.
1959

The contract to operate from London Heathrow to Glasgow via Manchester was important to Dan-Air. Although it was a cargo only flight it did show the Air Transport Licencing Board that Dan-Air was a capable airline. UK Authorities were not alone in making life difficult for independent airlines. The Government Office Of Italian Aviation had rejected several applications from UK operators who wished to fly passengers on behalf of Tour Operators on charter flights to Pisa. Several airlines including Dan-Air, Hunting Clan, Derby Aviation, British Eagle and Starways were affected. The local Mayor along with several hotel and business owners demostrated and wrote to the Minister to demand that the flights go ahead. Many UK would be passengers had had their flights cancelled. The local news agency claimed it was the Government's attempt to protect the state owned Italian airline, Alitalia.
Blackbushe Airport was proving not to be adequate for a growing airline. In no small part because the runway passed a major road. A new home was sourced. The UK Government insisted that all none BOAC or BEA flights would have to operated from Gatwick when it opened to the public. British European Airways was in a fortunate position in that it had very deep pockets. The state owned airline would be subsidised even if it operated at a loss. Their Ambassador Aircraft had been purchased by BEA in 1952. In total 20 of them were delivered to the airline over the next few years. BEA gave the airliner the name 'Elizabethan Class'. In a short time the Vickers Viscount became available. The Viscount was the first turboprop aircraft, therefore it was much quieter, cleaner and efficient that the piston engined Ambassador. The Ambassadors that Dan-Air purchased from BEA were less than six years old and in excellent condition. The Ambassador had carried 47 passengers in what was considered a 'quiet cabin for a piston engined aircraft' Dan-Air configured theirs to carry up to 55. This was straight forward as BEA had invested heavily in ensuring the comfort and space of its passengers. The Ambassador contained power points in its galley that enabled cooked food to be brought aboard and kept at the correct temperature, courtesy of insulation with glass and cotton wool. This was not the usual standard for Dan-Air passengers who would be offered tea and coffee with sandwiches and salads. On ad hoc charters where hot catering was required the airline could oblige. The Ambassador could fly at 20,000 none stop as far away as Malta. Other charter carriers purchased similar models. As more destinations became available the charter competition was intense. 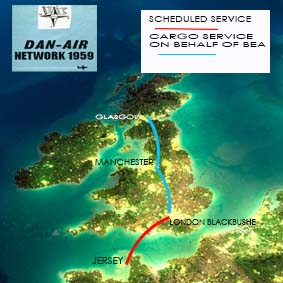